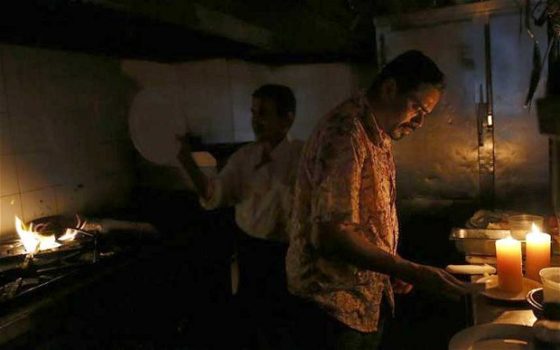 The dystopian state of the democratic socialist nation, Venezuela is in the midst of a massive power blackout.  With no end in sight, the blackout is the result of years of government incompetence that has caused the power grid to deteriorate. As citizens panic, the government continues to further impoverish and enslave the civilians making them suffer.

Much of the country was plunged into darkness Thursday, reportedly after major problems coming from the country’s primary hydroelectric power plant, according to a report by NPR.  Residents in some areas have seen a sporadic restoration of power, but people in other areas are growing more desperate and angrier. It’s become a precarious and dangerous situation for anyone counting on electricity for healthcare needs in the socialist country as well. According to The Wall Street Journal, the independent health watchdog Codevida said that “15 dialysis patients have died as a result of the blackout and some 10,000 more were at risk if they continue without treatment.”

The power problems are a symptom of 15 years of socialist policies that have left the country without a reliable network despite having the world’s largest oil reserves. Late socialist leader Hugo Chavez nationalized the power sector seven years ago amid a wave of state takeovers, reported the Telegraph.

“The food we had in our refrigerators has spoiled. Businesses are closed. There’s no communication, not even by cell phone,” 49-year-old Ana Cerrato told Reuters. “We need help! We are in a humanitarian crisis!”

“This is driving me crazy,” said Naile Gonzalez in Chacaito, a commercial neighborhood of Caracas. “The government doesn’t want to accept that this is their fault because they haven’t carried out any maintenance in years.” But that’s socialism. Once the government takes over and gets control and power over people and infrastructure, they do as they please.  Governments in history have never cared about anything or anyone other than those who can give them more money and more power.

According to Reuters, Winston Cabas, the president of an electrical engineers’ professional association, told reporters that several of the country’s thermoelectric plants were operating at just 20 percent of capacity, in part due to lack of fuel. He also said the biggest problem is the government and the rationing of electricity.

“This is going to end ugly. It’s going to be ugly at the end,” designer Nela Garcia told an NPR reporter over the weekend.