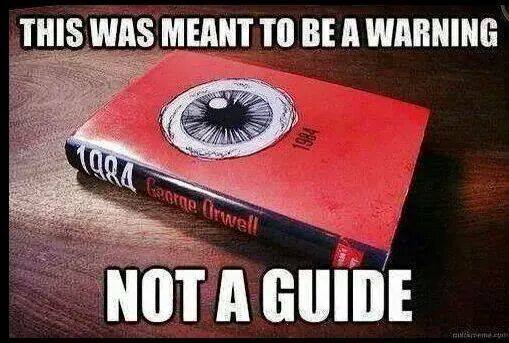 “Oceania” was a nation described in George Orwell’s “1984” as being comprised of Britain (called “Airstrip One,”) and the United States. There were two other superpowers, namely Eurasia and Eastasia. Other lands rich in resources were contested over, such as Africa and assumingly South America…lands never kept by any of three Super-states for any significant period. The “flux” in conquests was exactly what the MIC (Military Industrial Complex) of our time would have termed “necessary” to justify large expenditures: War as the focal purpose, rather than the exceptional event.

We see a parallel in today’s world with huge defense budgets and troop deployments keeping the contracts on the move and siphoning off a considerable amount of national revenues to keep the patriotic war machines moving…respective of each nation. The psychology: keep the population agitated and on a continual war-footing, using a “threat” (either real, created, or imagined) to accomplish this.

You are witnessing the final alignment of those spheres of influence that are almost identical to the novel that Orwell wrote. Look at the situation with the alleged Russian poisoning of an intelligence operative and his daughter in Britain. The United States showed “solidarity” with Great Britain by expelling 60 Russian diplomats and closed the Russian consulate in Seattle, Washington. Russia countered by ordering the expulsion of an equal amount of American embassy personnel.

Yet the interesting fact is that the other nations who followed suit in the “humanitarian crusade” of the alleged Russian poisoning of former FSB agent Skripal and his daughter? The poisoning may have been done by the British, not the Russians. The U.S. State Department has made several statements to the tune that the Russians do not “see eye to eye with us or share our values of freedom and democracy.”

Really, now…in the surveillance state that inexorably draws to its conclusion with the country losing its rights while being monitored in every activity…what “values” do we have anymore?

I’m not characterizing the entire populace of the United States…but our government, that holds most of the “forms” that the country was founded upon without any true leadership, statesmanship, or representation of the American people. I’m characterizing much of the population…flitting from one reality show to the next dose of Hollywood propaganda and paradigm shift labeled as “movies” and only loyal to the country as long as the handouts (labeled “entitlements”) keep flowing.

The formation of the Super-states…each with their spheres of influence in the novel…that formation is taking place now. Latvia, Lithuania, Estonia, Poland, and Romania have expelled Russian diplomats in-line with the U.S. actions. All those nations are heavily-invested in NATO militarily, with tremendous amounts received of American money, materials, and troops. Poland is purchasing U.S. missile and anti-missile systems. Romania already has a U.S. missile base.

Ukraine expelled Russian diplomats. Ukraine is a vassal state of the United States and the IMF. Most of the European nations such as the Netherlands (The Hague is there, go figure), Germany, France, Britain, Spain…followed suit. The battle right now is to see who will align with the U.S.-British Western hegemony [Oceania] against Russia and her allies (such as Iran, Syria, etc.) [Eurasia] with China being the “top banana” in the Orient [Eastasia]. The English-speaking countries will head the U.S.-British conglomerate…also including Canada and Australia…the former having participated in the expulsion.

It’s even deeper than the geographical and political distinctions paralleling “1984” when you examine it further. Little by little, as the U.S. becomes more repressive, more controlling, with a “nationalistic” bent driving the framework, the citizenry is becoming isolated. After World War I the United States pursued an isolationist policy, and the policy was reflected in the mindset of the citizens. This current isolation is one that is forced.

Oh, we’re building a wall to keep out the illegal aliens? Possibly, but look how late in the game it is. Look at how illegal incursions have taken place without any true resistance for more than a century unchecked and unabated.  Why? To satisfy the U.S. corporations’ demands for cheap labor that could be off the books…and the government that turned a blind eye to it because of the taxable revenues made from the corporations. The taxes were paid, and kickbacks were undoubtedly delivered to government officials who managed to look the other way when faced with 100 illegal aliens working in the fields in front of their eyes. Everyone looked away, the corporations made profits, and everyone was happy.

The main reason to build the wall will not be to prevent illegal aliens from coming into the U.S., but to appear to prevent illegal aliens from coming in. That will be the main reason…subtly swathed in the name of the sacred “interests of national security” phrase we’ve all come to know and love. All the construction will be subject, of course, to taxation, kickbacks, and contracts to keep the flow of taxpayer monies moving out of their pockets and savings accounts into the hands of the rich and powerful. There is also another reason…purposed and insidious they wish the wall.

A wall will work in the opposite direction as well: to keep the taxpayer-serfs in.

Slowly but surely, a forced isolation policy is being pursued, and more: the ones traveling will be pursuing a government agenda in their endeavors and it will be limited to those with capital and wealth. We’re seeing it already: the new laws (Don’t you just love that? New laws?) that restrict those with a certain amount owed in taxes, in child support, or whatever…keep them in the country. How about that? The firms and corporations, and their employees…with the “trusted traveler” status…basically a “get-out-of-jail-free” card. Trusted to keep paying the taxes and conform to the existing social, political, and religious order…to be a “nark” on behalf of the government.

To be the “guy with the watch” in the movie “They Live,” selling out to the aliens.

All your communications are monitored: every e-mail, every telephone call. Talk to your friends in Moscow from college, and you’ll come up on a watch list. Talk to anyone outside of the U.S. and it’s a guarantee that you’ll be recorded and monitored. The new “Cloud Act” that slid surreptitiously between the thighs of the Omnibus $1.3 trillion spending bill (really…$1.3 trillion, can you imagine all the kickbacks on that one?). The harmless-sounding Cloud Act…giving foreign nations the ability to carry out U.S. government directives “in cooperation,” or “in partnership” …to surveil and monitor U.S. citizens and bypass the U.S. Constitution.

Marbury vs. Madison is extinct.  Go ahead and take them to court, protest, and write to your Congressman or Senator (accomplishing nothing except identifying and marginalizing yourself). Your suit, your protests, and your letters will go nowhere…and eventually they’ll break you…and you’ll go somewhere…in the middle of nowhere…indefinitely (synonymous with forever). The need for a chargeable offense to arrest you is gone, along with the 4th Amendment…now you just need to be a “suspicious person” and be placed “under investigation.”

All of this is crafted to make the populations poorer, keep them monitored, and prevent them from interacting with one another as before. Limit their freedom of movement and therefore limit their freedom. This is happening in the other two “spheres of influence” as well. China has a Draconian police state where cameras and stoolies monitor and report every move of the people. China is the “model” (in the words of Kissinger and other globalist-Communists). The police in this country are becoming as the ones in China, with a capitalist agenda: To protect and serve the taxable, corporate entities, and oppress the common taxpayer.

This is the end-state desired by the creators of the Global Governance. They follow Milton’s words to a tee: “It is better to rule in hell than to serve in heaven.” They will have three spheres, just as in the novel “1984,” and keep the flames of ethnic difference fanned just enough to make War not an eventuality, but a managed, controllable event. War translates into industrial output, use of supplies and materials, and largesse that ends up “boomeranging” and turning into raises and bonuses for politicians (look at Congress “voting” themselves raises and bonuses in the Omnibus bill while simultaneously increasing the “defense” budget).

War enables favors, contracts, and immunity for oligarchs. A self-sustaining war machine that keeps the three spheres of influence at each other’s throats…while “managing” the people and tying them up in a never-ending loop of consumption, production, impoverishment, debt, and always directed by patriotic fervor.

In the end, the world will not notice its enslavement, because the generations capable of creative thought and reason will have been replaced by a stultified, obedient mass of humanity only capable of acting in a manner predetermined by the rulers. The world of “1984” is forming today. The Gulags are just around the corner. They’ll have “occupants” as soon as the time is right. Not at gunpoint. The people will enter the camps of their own accord, enslaved with the baits of entitlements and material conveniences. The world of “1984” was written about years ago, but it is upon us, now, and before we know it, we will be in it.

Jeremiah Johnson is the Nom de plume of a retired Green Beret of the United States Army Special Forces (Airborne).  Mr. Johnson is also a Gunsmith, a Certified Master Herbalist, a Montana Master Food Preserver, and a graduate of the U.S. Army’s SERE school (Survival Evasion Resistance Escape).  He lives in a cabin in the mountains of Western Montana with his wife and three cats. You can follow Jeremiah’s regular writings at SHTFplan.com or contact him here.

This article may be republished or excerpted with proper attribution to the author and a link to www.SHTFplan.com.