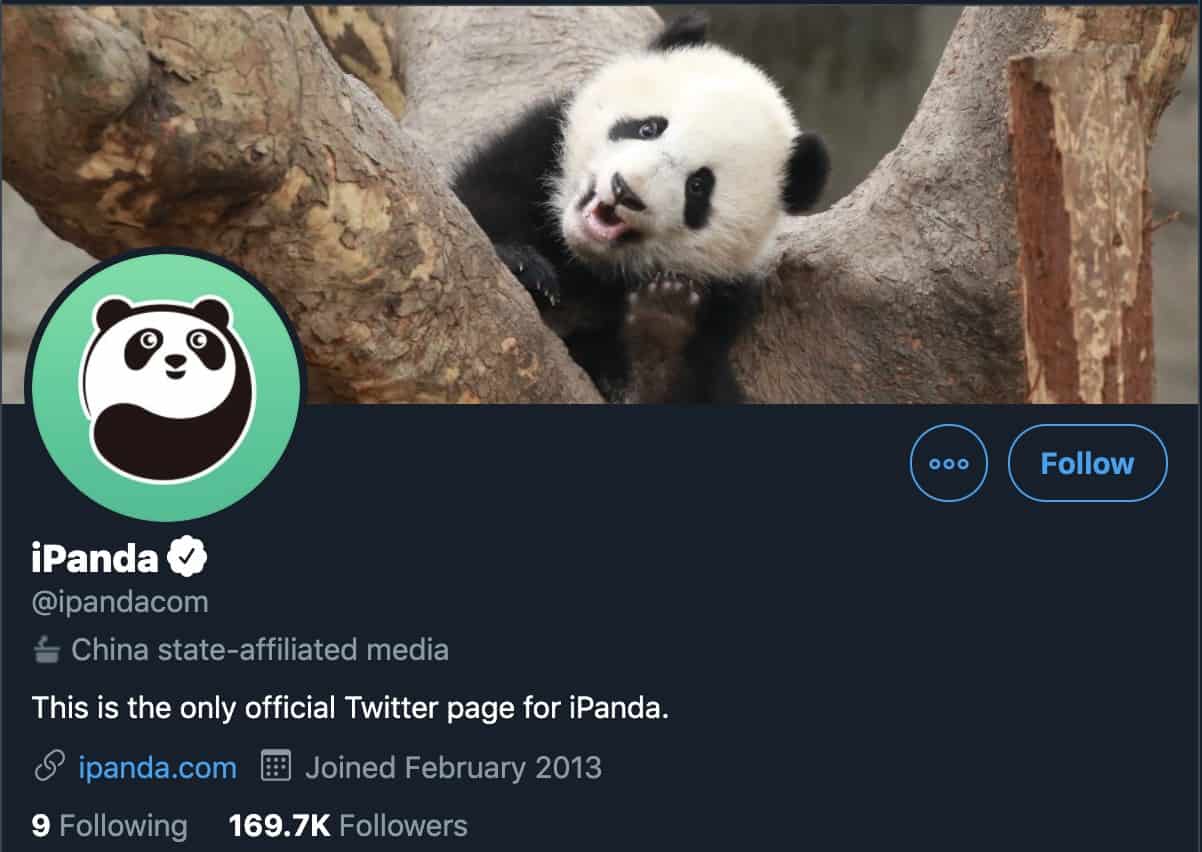 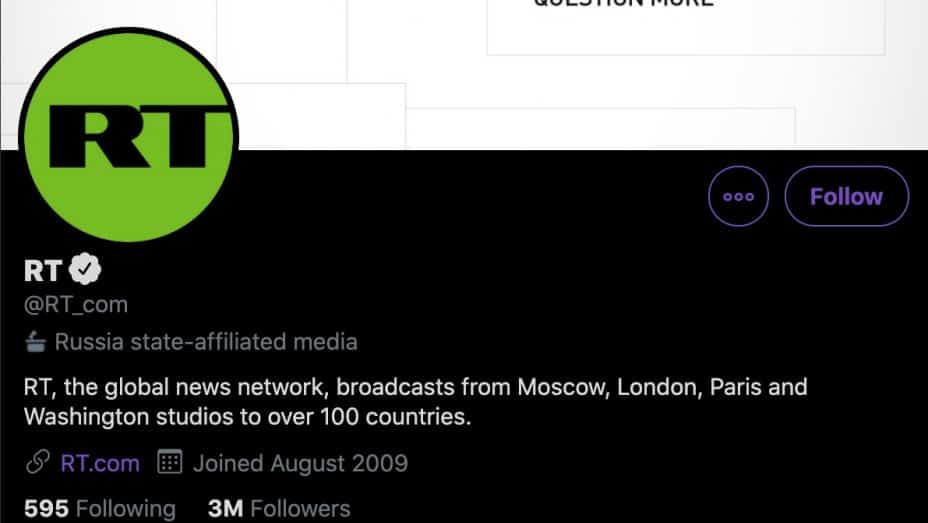 Editor’s note: Mind you, albeit privately-owned CNN, MSNBC, etc is just as much regime media in the US as BBC is in Britain.

Twitter has declared war on certain state-affiliated media entities, announcing accounts belonging to senior staff will be labeled and their tweets won’t be amplified or recommended. The BBC and US state-funded media are exempt.

In a Thursday blog post, it warned it will no longer show tweets from state-linked media accounts on the home screen, notifications, or search.

P.S. Follow us to see what the US state-affiliated media doesn't show you pic.twitter.com/RxriP09dfj

Perhaps unsurprisingly, Twitter left a sizable loophole for the US and friendly nations, explaining that “state-financed media organizations with editorial independence, like the BBC in the UK or NPR in the US for example, will not be labeled.”

When it comes to conversations with government and state-affiliated media accounts on Twitter, we’re helping to make the experience more transparent.

We'll now use two distinct profile labels for these types of accounts, so you can easily identify them and their Tweets. (1/2) pic.twitter.com/JW67o422MO

“We believe this is an important step so that when people see an account discussing geopolitical issues from another country, they have context on its national affiliation and are better informed about who they represent,” Twitter explained in the post, adding that it would not be labeling government officials’ personal accounts – just those associated with their offices.

For clarity: we don't let state-affiliated media accounts advertise on Twitter. We’ll also no longer include them or their Tweets in recommendations, as we continue to support a free and independent press.

Betraying a shockingly dim understanding of American media, Twitter explained that “unlike independent media, state-affiliated media frequently use their news coverage as a means to advance a political agenda.”

Perhaps attempting to fend off discrimination lawsuits, they added that the move had come after consultation with “a number of expert groups, including members of the Digital and Human Rights Advisory Group in Twitter’s Trust & Safety Council.”

Clicking on the new labels takes the viewer to a page explaining the policy, which hints it “will be expanded to include additional countries in the future.” The page refers to them as “election labels,” suggesting the policy is a response to ongoing baseless claims that Russian social media manipulation was responsible for President Donald Trump’s 2016 victory. With the November election less than 100 days away, social media platforms are scrambling to censor non-approved views, especially those they can link to un-American activities.

A Twitter spokesman declined to provide a full list of entities to be censored to Reuters, but mentioned RT, Sputnik, and Xinhua News by name. Facebook recently adopted a similar policy, complete with double standard for US and friendly state-controlled media organizations.

Twitter defines “state-affiliated media” in a Thursday blog post as “outlets where the state exercises control over editorial content through financial resources, direct or indirect political pressures, and/or control over production and distribution.”

Tweets from these accounts won’t be amplified or recommended. It also warned it will no longer show tweets from state-linked media accounts on the home screen, notifications, or search.

Chinese media outlets are exceptionally targeted under the new policy. As of Friday, CGTN, Global Times, Caixin, CCTV and NewChina are all so labeled under their account names.

Even an account for iPanda, an online channel featuring 24-hour live streaming of giant pandas, is featured as “China state-affiliated media.”

However, accounts affiliated with the U.S. and friendly nations, “like the BBC in the UK or NPR in the U.S. for example,” are exempted from the policy, explaining that they are “state-financed media organizations with editorial independence.”

The company also added that the move had come after consultation with “a number of expert groups, including members of the Digital and Human Rights Advisory Group in Twitter’s Trust & Safety Council.”

That group includes pro-censorship entities like the Anti-Defamation League, the Dangerous Speech Project, and Feminist Frequency.

With the November election less than 100 days away, this is another attempt by social media giants to declare their “immunity” from influencing the election results, scrambling to censor non-approved views, especially those they can link to un-American activities.

Facebook is labeling content posted by state-funded media outlets and plans to bar them from running ads in a conveniently loophole-packed effort to prevent “foreign influence” in the 2020 U.S. presidential election.

Pages of Russian and Chinese media outlets were graced with the new warning labels on the announcement day.

Russia’s RT, Sputnik, and Redfish and China’s Xinhua News and CGTN also have warning notices on their pages under the heading “Page Transparency,” while news outlets controlled by countries that are U.S. allies, like the BBC, carry noticeably softer language – a similar double standard to that in evidence on YouTube, which has carried warning notices for years. 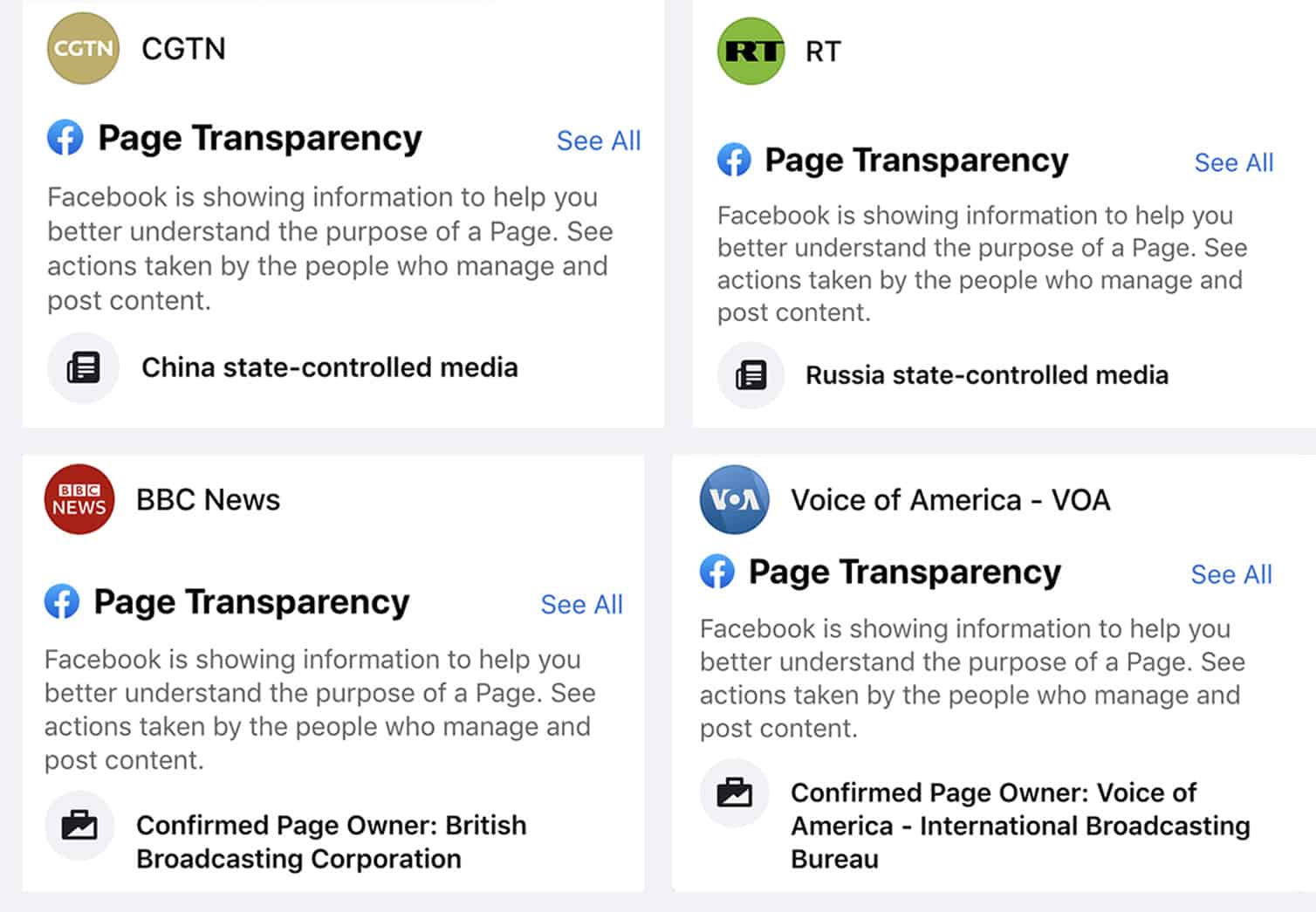 The social media company claimed it is taking other factors into account besides government ownership, explaining it will also consider “country-specific factors, including press freedom” – whatever that entails – and “open-source research conducted by academics and leading experts.”

RT called out the hypocrisy of the social media giant in a statement, saying that “a U.S. company long in bed with the US establishment, telling the entire rest of the world what it can and cannot say, is the definition of a technological dictatorship and censorship.”