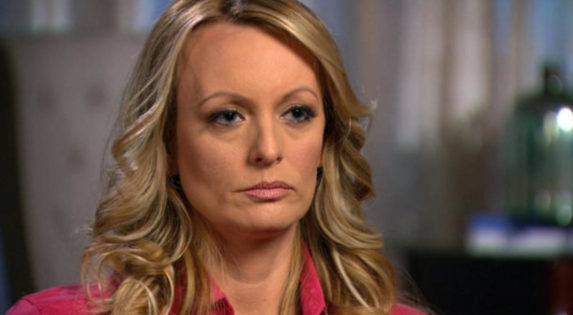 The left’s favorite hero, Stormy Daniels has been arrested in a Columbus, Ohio strip club for inappropriately touching patrons. The adult film actress was busted touching patrons on stage which is a violation of a state law.

Daniels now faces three misdemeanor counts of illegally touching a patron and will be arraigned Friday morning, court records show. Daniels will plead not guilty to the three misdemeanor charges, her attorney, Michael Avenatti, tweeted. According to CNN, one of Daniels’ biggest cheerleaders, she posted $6,054 bail and was released Thursday morning.

“She was arrested for allegedly allowing a customer to touch her while on stage in a nonsexual manner! Are you kidding me?” Avenatti tweeted. “They are devoting law enforcement resources to sting operations for this? There has to be higher priorities.”

She was arrested for allegedly allowing a customer to touch her while on stage in a non sexual manner! Are you kidding me? They are devoting law enforcement resources to sting operations for this? There has to be higher priorities!!! #SetUp #Basta

However, in a probable cause affidavit obtained by CNN affiliate WSYX, detectives who were at the Sirens Gentlemen’s Club said they observed Daniels remove her top and force patrons’ faces into her chest. “The officers also observed Ms. Clifford fondling the breasts of female patrons,” Franklin County Municipal Court records show.

When officers witnessed those activities, three detectives approached the stage. Daniels allegedly made her way toward two detectives, leaned over and grabbed their faces. She shoved each of their faces between her breasts, court documents said.
She fondled a third officer’s buttocks and breasts, according to the documents. Daniels was one of three people arrested at the club, but it’s unclear who the other two were. –CNN

Avenatti closed his tweet with #SetUp, alluding to his belief that Daniels’ arrest could have been politically motivated. Daniels apologized for being arrested and unable to perform for her fans and customers later.

Official Statement From @StormyDaniels: As a result of what happened last night, I will unfortunately be unable to go forward with tonight's scheduled performance. I deeply apologize to my fans in Columbus.

Avenatti says that he will help Daniels fight all the charges.