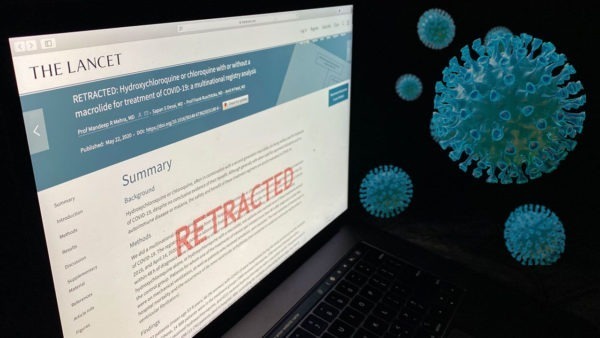 A leading medical journal has issued a retraction of their endorsement for a study that concluded the anti-viral drug hydroxychloroquine was ineffective against the COVID-19 virus. This retraction appears to validate the claims then-President Trump made about the medication being a frontline drug in the battle in the pandemic.

The Lancet, a respected online medical journal, issued an apology to its readers in an edition last year after the retraction. “We deeply apologize to you, the editors, and the journal readership for any embarrassment or inconvenience that this may have caused,” the publishers of The Lancet said.

The Lancet’s endorsement of the study was withdrawn because the Surgisphere Corporation, the company that provided data, refused to provide full access to the information it based its study on. Peer review medical journals typically engage in third-party peer review to validate the findings.

Covid-19: Lancet retracts paper that halted hydroxychloroquine trials https://t.co/9dWQhm5QLM – What impact did this highly embarrassing “Retraction” by @TheLancet have on the adoption of Hydroxychloroquine as a ‘potential’ effective treatment for #COVID19?

The Surgisphere Corporation said it refused to release the study data because it would violate client agreements and confidentiality requirements, raising questions about the study’s legitimacy.

“Based on this development, we can no longer vouch for the veracity of the primary data sources. Due to this unfortunate development, the authors request that the paper be retracted,” The Lancet said in a statement.

In the now debunked study, researchers concluded that hydroxychloroquine didn’t aid in curbing the COVID-19 virus. It went on to say that the drug caused heart problems and appeared to elevate the risk of death.

The study was immediately embraced by the beleaguered World Health Organization and other groups causing research into the use of the drug to combat COVID-19 to stop.

The Corruption of Science. The Hydroxychloroquine Lancet Study Scandal. Who Was Behind It? Anthony Fauci’s Intent To Block HCQ on Behalf of Big Pharma/ By Prof Michel Chossudovsky, Global Research, June 10, 2020https://t.co/5FYzrePfgM

In seeking a third-party peer review, disturbing questions about the research and the data sets used started to emerge.

“Our independent peer reviewers informed us that Surgisphere would not transfer the full dataset, client contracts, and the full ISO audit report to their servers for analysis as such transfer would violate client agreements and confidentiality requirements,” The Lancet statement said.

The third-party peer reviewers were unable to execute “an independent and private peer review” and, thus, withdrew from the process, the medical journal stated.

There is no estimate of how many lives could have been saved if the World Health Organization and the Center for Disease Control – along with all of the many foundations and institutions who were more focused on the profit margin of vaccines and new drug therapies – would have explored the benefits of hydroxychloroquine in combating COVID-19.