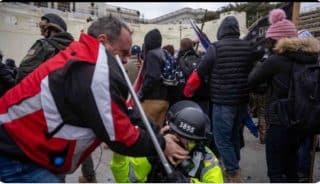 Thomas Webster appeared in court Tuesday, where federal prosecutors alleged that he wore a bulletproof vest and was prepared for “armed conflict” during the Jan. 6 attack on the federal building. Prosecutors alleged that Webster attacked a Capitol police officer using a flag pole that was flying a Marine Corps flag and also pulled down the officer’s mask, causing him to choke.