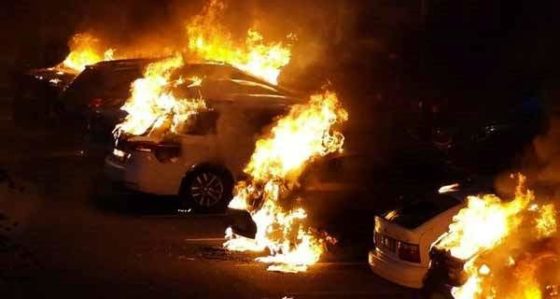 After California’s run-in with major wildfires and the deadliest one to date recently ravaging Paradise, many in the hardest hit areas are hiring private firms to protect their homes. But it’s upsetting the state-funded firefighters.

With California experiencing two years of unprecedented wildfires that have left more than 20,000 homes destroyed and scores dead, the private firefighting business is booming. These brigades work independently from county firefighters; their job is to protect specific homes under contract with insurance companies, according to The Los Angeles Times.  Private fire crews’ work can vary from pushing back flames as they approach properties to from getting to the site before the blaze arrives and spraying the homes covered under their policy with fire retardant. But the firefighters who rely on state funds are not too happy that the free market is making a huge difference and saving homes from the blazes.

Kim Kardashian went on Instagram to thank firefighters for saving her Hidden Hills estate and told Ellen DeGeneres in an interview that she hired a private crew to protect her property.

“Our house is right on the end of a big park, so the whole park had caught fire and so if our house went, then every other house would go,” she said. “I don’t take that for granted, and that was such a blessing that we were able to do that.” –The Los Angeles Times

But the taxpayer-funded state firefighters are not happy that the private market is doing a good job. “From the standpoint of first responders, they are not viewed as assets to be deployed. They’re viewed as a responsibility,” complained Carroll Wills, communications director for California Professional Firefighters, a labor union representing “rank-and-file” firefighters in the state.

Private firefighting crews often work on behalf of insurance companies, such as Chubb and USAA, so they have a vested interest in saving people’s homes. They also have proven that they can provide an additional layer of protection for homeowners who opt into the service as part of their insurance policies. The insurance policies range in cost from several thousand to tens of thousands of dollars annually, depending on the homes’ insured value and other factors, such as location. Private companies are also effective. During a wildfire, the private crews might not visit every home insured under the program but will base their location decisions on where the flames are advancing and which homes have a high likelihood of being destroyed without their assistance, reported the Los Angeles Times.

What began more than a decade ago as a white-glove service for homeowners in well-to-do neighborhoods has expanded in recent years as the wildfire danger has increased, said Michael Barry, a spokesman for the Insurance Information Institute, a not-for-profit organization that educates the public about the insurance industry.

But not all state firefighters think the free market is a bad thing. “It’s clear, unfortunately, that just when I don’t think it can get any worse in terms of structures destroyed, it seems to get a lot worse,” California Department of Forestry and Fire Protection assistant chief Chris Anthony told the Los Angeles Times. “If these insurance companies are trying to mitigate risk and liability, the trends are pretty clear the numbers are going to rise as fires get worse. From an economic standpoint, it makes total sense what they’re trying to accomplish.”